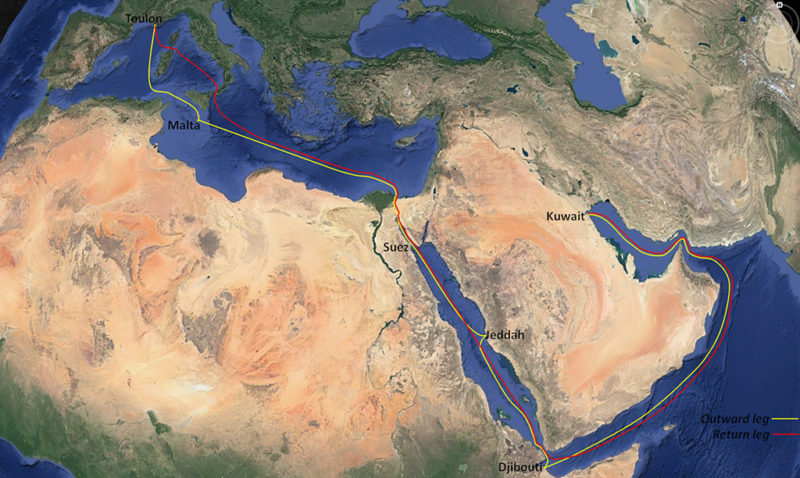 AQABA (Air Quality and Climate Change in the Arabian Basin) campaign was a shipborne campaign organized by Max Planck Institute for Chemistry in Mainz in collaboration with The Cyprus Institute and other universities and research centers worldwide.

The Eastern Mediterranean and Middle East (EMME) region has exceptional environmental specificities, with extensive deserts, and is the most water-scarce region on Earth. In addition, heat extremes, dryness, atmospheric dust and air pollution combine into a major public health hazard.

The AQABA project aimed to address these issues, by providing the first-ever comprehensive in-situ characterization of the photochemical and aerosol processes in the EMME.For this purpose, 2.5-month oceanographic cruise (during summer 2017) was organizedconducting pioneering atmospheric measurements across the Mediterranean and Arabian Basin (Toulon-Kuwait-Toulon).

The Unmanned Systems Research Laboratory (USRL) of the Cyprus Institute (CyI) in collaboration with ENAC (EcoleNationale de l’AviationCivile) had developed a cost-effective UAV – sensor system with the capability of providing autonomously gas/aerosol measurements in the atmospheric column up to an altitude of 2.5km above sea level while the research vessel was sailing.

The UAV had been equipped with the novel Chimera autopilot system developed by ENAC; it had been equipped with an Optical Particle Counter (OPC), Ozone, NO2, and basic meteorological parameters (Temperature, Relative-Humidity, and Pressure). A hand-launch had been used for taking off the UAV, while landing had been performed on a net installed on the ship’s stern. The atmospheric measurements vertical profile had been performed in a spiral ascent and descent with the spiral centre continuously shifted relative to the ship’s movement